MIDWEST – The Week In Review!!!

The Week in Review

Holy Hot Dammm, we just stormed through the Midwest like a tornado, and i want to recap. THANKS FOR SUCH AWESOME TURNOUTS EVERY NIGHT!

First off, Thursday night in St Louis…all ages. I start getting heads up from my tour managers that it is FULL ON blast to the past Rave-Days, and when i showed up there were literally hundreds of kids with glowing regalia, glow sticks, it was bananas. I got there as Mochipet went on, in his purple dinosaur costume, and it reminded me of when i used to work as Barney, The Purple Dinosaur, at little kids’ birthday parties in San Jose, back when i was in college. I always wanted to play a set in it, but it was sooooo hot inside that thing…there was no way.

So Mochipet is THE MAN, and his beats were off the chain. Then Dylan cranked up the Wobble Factory, we had the stage RAMMED with speakers and my eyeballs started to shake and my mouse stopped working cuz of the vibrations… kids went bonkers and it was an epic night.

Onward to Lincoln, mu-fuckn Nebraskaaaa. First night kicking off their new venue, the Bourbon Theatre…it was sold out to the gills, just ramm ramm rammmmed and i was covered in sweat before i even started playing. My man Jesse Jackson was in the house and we got all crunk before the show, and after the show, and during the show, and i looked up and there was like a row of girls, 2 deep, along the front of the stage all humping the Wobble Factory Subs…i thought they were gonna get ejected, but the crowd kind of just merged from the dancefloor to the subs and we went with it. Super smooth and super fun!

Then Saturday i woke up in Minnesota, at the Bella Madre Festival… lots of hippies. It looked like a grateful dead lot… i was immediately nervous like what are we doing here, our sound is going to crush them! should i throw together some jam band remixes? i dont even like jam band music! But sure enough, these kids were off the hook… it was AWESOME!!!!! a good 4000 nutters all rammed up to the stage for the first song, and they throbbed along like pro-FESH-unnalzz! (it is a testament to how hard my kru raged both in lincoln and bella, cuz we got ZERO footage!)

We were about an hour and a quarter deep into the set when all of a sudden my leg hair stopped moving and i was like “Some Body Dun TURNED OFF THE SUBS!!!!” Next thing i know, Elliott comez up and sez “The Cops are here dood. They’re pissed.” Then i find out its the farmers surrounding the property and they WERE NOT HAVING IT.
So We were too loud for the crowd…but that crowd was off the hook, and WE WILL BE BACK!!!!! As soon as possible (heartfelt thanks for your open minds, can’t wait to get round 2 with you all!)

So we kept our fingers crossed that we would get out of there without getting pulled over on our way out, and sure enough we got through hassle free. I fell asleep and woke up outside Chicago at SUMMER CAMP.

Holy moly, that place was HOT, and packed.

We had to play this goofy stage sponsored by “Jaegermeister” which wouldnt have been that bad if they just put up a stage, but they LITTERED every freaking INCH of it with “Jeagermeister” banners…

i was thinking “Guys! Dont be so DESPERATE! you gotta tease us a little! One Banner is enough! you do not need 87!”
But sure enough there were 8 billion massive Jagermesiter signs….enough for every starving child in Ethiopia to turn into a blanket, but anyways, as we started playing the place just PACKED OUT, and i got super inspired…i had expected kind of a low turnout cuz it was the day time, but sure enough it was freaks as far as my little eyes could see.

At one point i felt like paying homage to the ever sarcastically ironic Stephen Colbert, and kind of endorsing Jaegermesiter….

AS IF THEY NEEDED NINE MILLION BANNERS…i mean we GOT THE POINT from the big overhead Jaegermesiter sign, guys! we dont need you to put up anymore.

now i do not beleive in religious gods…or spirits, or anything phony like that. But i think the gods of jager crept into the stage to avenge themselves, because moments after i said that, i was bouncing around like a freakin hyena on the stage loosing my mind and WHAM!!!! 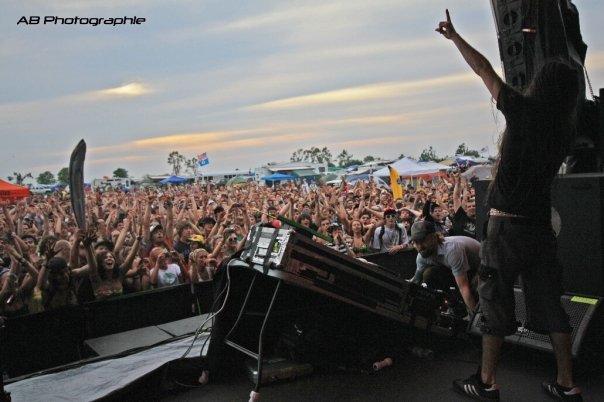 Of course, as always i had a CDJ there for back up, and i threw on a tune and laughed with the crowd, and we got everything back up and running and it was DANDY! kind of cute even. 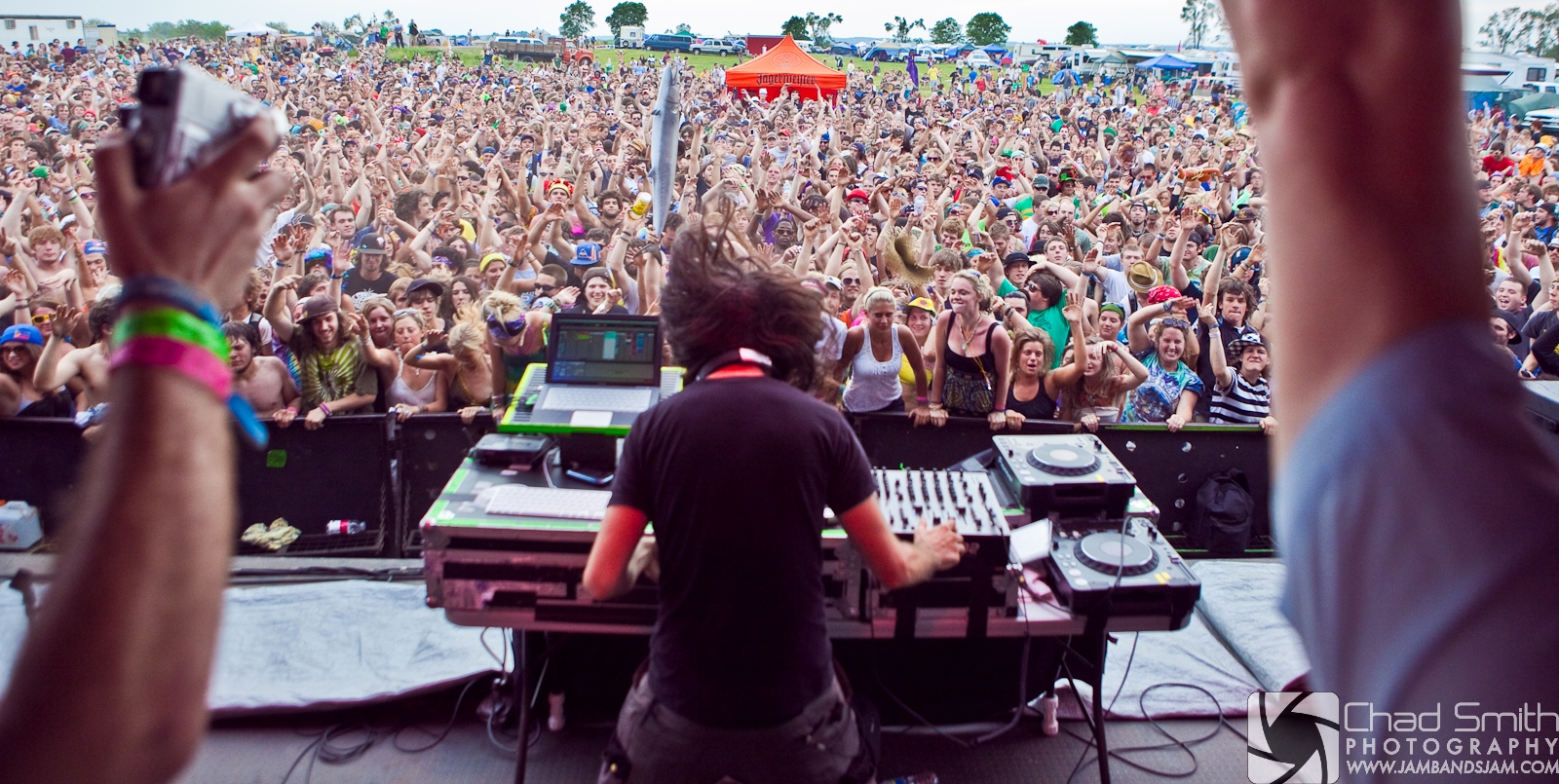 Lasted us through the mega hot late night as well, and i thought we were home free. 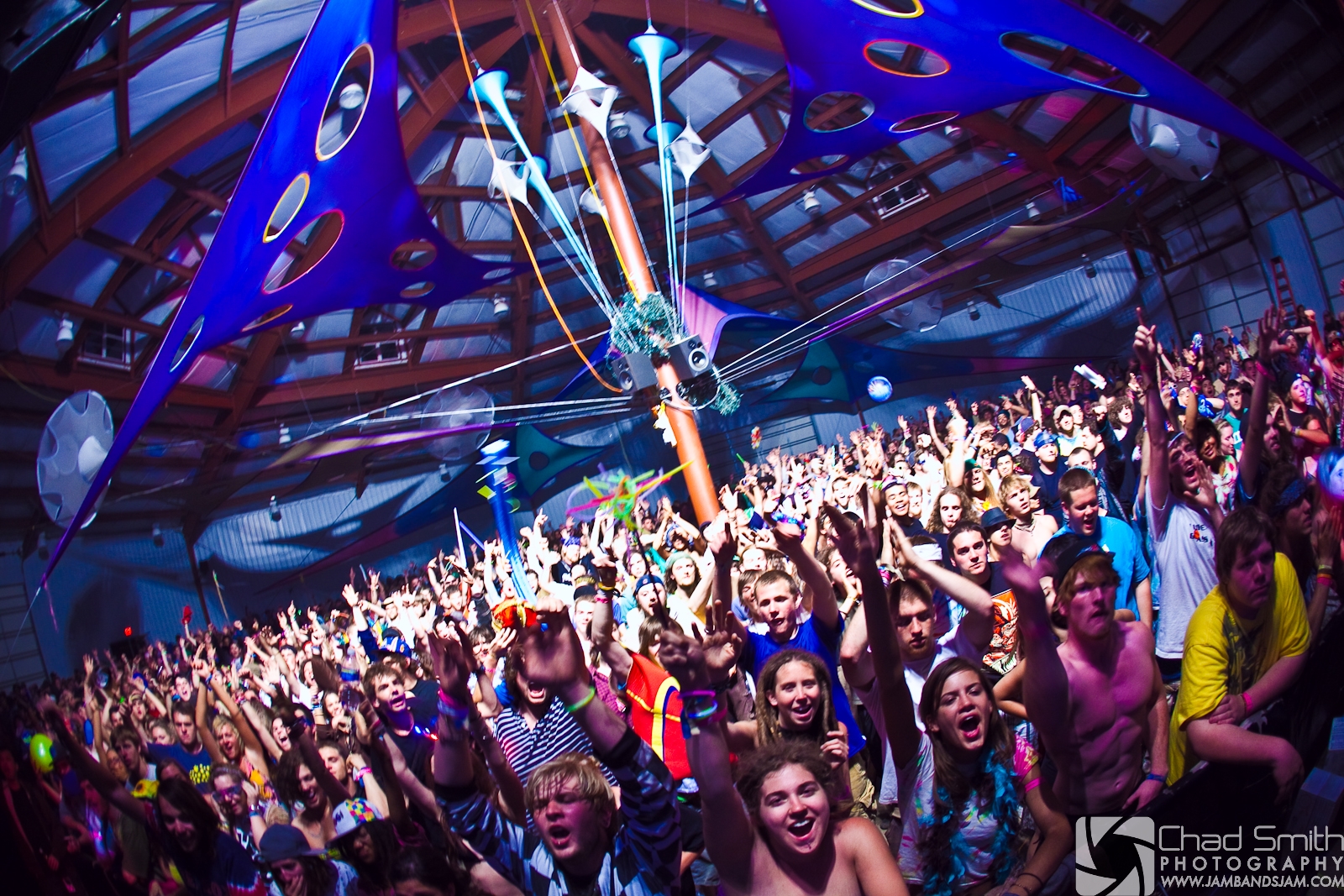 Then Detroit. Monday night, closing out the Detroit Electronic Music Festival, MOVEMENT 2009, and my VERY FIRST SONG, the computer crashes.

i was just about to hit those folks with the WELCOME TO THE JUNGLE…oh LAWD i wanted to CRUSH DEMMMM!!!!!

What followed was one of the most voracious technical nightmares of my life, 2 laptops, a hardrive, 3 sound cards, literally FORTY FIVE MINUTES of pure insanity, blood racing, like WHAT! THE! F*CK! AM! I! GOING! TO! DO!>!>!?!

Nothing was loading, it was all just dead dead dead, and of course meanwhile, i have half the world’s photographers ALL over the stage, straight photo shooting me in COMPLETE scramble mode…

i dug into my bag, for a zip lock baggie of scratched up CDs i had not used since Burningman 2008… they were all mislabeled, out of order, just NONSENSE, and i start beatmatching away, which is a simple task really, but not where you are COMPLETELY FOCUSED on basically being LIVE TECHNICAL SUPPORT!

So as i mixed into tracks on the CD turntables, we hammered away, giving LIVE TECHNICAL SUPPORT STAGE SHOW 2009 to DEMF and i was literally at the end of my rope when POOF!

It all switched on,  fixed up, the gods of Jager released my fromt heir punishing jaws and we proceeded to straight 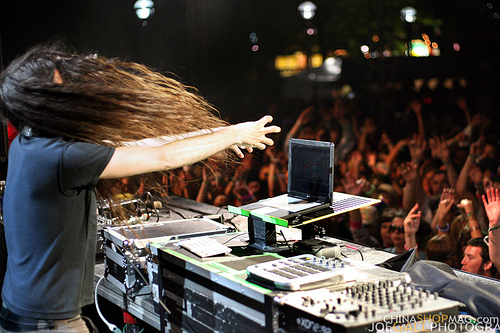 Oh Lord, that was so effing HOT!

I want to thank each and every creature and body for coming out, bouncing, jumping, screaming, surfing, diving, crashing, dancing, swatting, and completely soaking up the sound waves this past week

tomorrow night is Los Angeles, and then its basically 1 or more festivals a week until Fall.