Land of The Lupes!

Welcome to Bassland. Thanks for tuning in

And thank you SO MUCH to everyone who took the time to send us feedback, comments, thoughts and perspective. I decided to not respond to each one individually, because the point is i need to finish some music, but i soaked up all your ideas with vigor, and i am ever more inspired from it. Keep it coming…

We’ve got a new little bootleg for your ear drummmmms this week! It’s a mish-mash of components and it’s on the downtempo side of things… 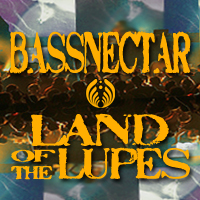 I took the beat of a long-overdue unreleased tune called “Stretch Reflex” and melted it together with the synths and melodies from another song that was supposed to be on Underground Communication, but ended up getting saved for later. It was written as a pensive homage to the dead, the original melodics sound like a black metal song but in this version they have kind of a nice 1990’s Orb or FSOL feel to them…that sound will never get old for me! Then i took some of the prettier melodies from that song and mixed them with a Lupe Fiasco acapella (i looooove his voice) and it became one of my favorite tunes to close a party with.

So this week we give to you ‘Land of the Lupes’ which is the working title of this goofily random combination of sounds, and an unrelated homage to one of my favorite bands in the world, Land of the Loops. It will most likely be included as an instrumental on the upcoming album this fall, and that “Stretch Reflex” beat will most likely be released on my website as a DJ Tools & Loops collection.

BUT FIRST! i will analyze myself:

And i will precede that with an admission: I am, perhaps, overly analytical at all times.

I remember when my father told me “you can do whatever you want in life – ANYTHING you want – but you cannot do everything”.

Implicit in his message to me was when you choose “Yes” to any one thing, you actively choose “No” to everything else. And that makes saying yes, at least for me, VERY difficult.

Because i want to do SO MANY THINGS, and i go soooo many directions simultaneously. And i am not afraid to admit when I’m wrong, even when i’m dead wrong. So it makes me open to a zillion possibilities.

This is probably the hardest to deal with when making music.

Every SINGLE second of any song (or potential song) can do/go/be anything/anywhere. The tempo can change, the layers can change, the drums can go out, or switch up, or get thick, or repeat, or the melody can switch voices, or go dry, or get new effects, or the effects can automate, etc etc etc.

i LITERALLY have spent/wasted/given thousands and thousands of hours of my life to this bizarre process, and there are now countless half-finished tracks living in a ghostly in-between-state of nonexistence on my computers…songs that may one day exist fully, but for now are awesome combination of possibilities, tangents, and explorations.

‘Land of the Lupes’ is a mixture of beats from one song, and melodies from 1 of the many versions of another unfinished song…they were totally unrelated, and also have nothing to do with the acapella.

but Happy Accidents lead to sometimes happy results, and that’s maybe one reason i think this tune sounds so good.

Keep in mind, like Goldiloxxx, we always want the porridge to be JUST RIGHT, not too hot not too cold.

Not too hard. not too soft.

This song is a bit on the softer side, so maybe its a balance for some of the new grinders pumping out of the labs these days… Viva La Tempo Changes! Viva La Ripping Sleazy Bass Patches! Viva La Musica!

So “Land of the Lupes” is kind of the goldilocksical counter-balance to the hardcore edge (like ‘Ready To Rage’ and the “Lions” remix); and i hope you enjoy them both, in their own special ways…

MUCH LOVE for spreading the word: