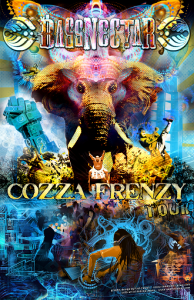 Bassnectar will be performing at the Vogue Theatre on December 4, 2009 in Vancouver with Heavyweight Dub Champion.

Vogue Theatre is located at 918 Granville St. in Vancouver.This is an all-ages event.

UPDATED: Vogue is letting us sell an additional 100 tickets through Bassnectar.net. Due to the exchange rate we have to raise the price by one dollar – increasing from $28 USD to $29 USD.

*A note on the venue change from Bassnectar Labs and Upstream Entertainment:

We hope you can trust us; we have made the best decision possible and accounted for all variables, never wanting to put out anyone or place the party in a venue that isn’t appropriate for raging!!! Richard’s isn’t ready to reopen and that is why we had to move to Vogue.
The Vogue isn’t what it used to be. Back in the day it was seated all the way to the front and (obviously) wasn’t very dance friendly. Well, those days are gone. The place is now run by a great guy (a LOCAL guy, this place isn’t owned by some lame giant corporation) who allows fans to let loose and have the kind of experience they have come to expect at a Bassnectar Show.

The movement logistics:
-This is a General Admission venue with more seats removed in the front.
-The numbers (approx):
-400 people can be directly in front
-700 people can be in the areas with no seating at all on the floor only (and there we’re already hitting the capacity of Richard’s.)

The Vogue’s seated area has room for 2 people between the seats upstairs (which fold up,) plus you have true space which grants a little breathing room to groove out in what will be a packed venue.
The short of it: plenty of space to move and dance in the aisles upstairs, plenty of space on the floor.We hope you come though so you can experience The Vogue and what it’s like in a party atmosphere. You’ll be pleasantly surprised and we will all have a blast.

Not to mention that The Vogue’s acoustics are better then anywhere in town, and Lorin’s going to sound amazing in there.

Thank you,
Bassnectar and Upstream Entertainment