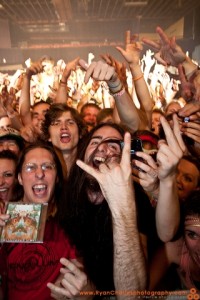 RRRRRRREEEECAP!!! Good gawd! The first leg of COZZA FRENZY TOUR has been BONKERS!!!! From Texas, to Alabama, to Tennessee, to Georgia, through North & South Carolina, and on to Florida, we just raized some hell and contributed to one hellava freakshow experience night after night to rammed out venues and eagerly awaiting bass-heads (and their eager eardrums).

Massive thanks to all attendees, supporters, the community Orgs, to the killer road crew, and to PK SOUND SYSTEM, LUMATECH, and DJ VADIM & HEAVYWEIGHT DUB CHAMPION.

While raging the tour front, the digital album wobbled its way up the iTunes charts. Thanks to everyone that supported, listened and shared!!!

As of today, the HARDCOPY CD’s are available in stores, or you can grab it from our lil’ shop at the Bassnectar Labs. Includes a free poster and lots of random notes and thoughts i wrote about my music and more. (mad thanks to all you hardcores who pre-ordered!!!! nutso!!) 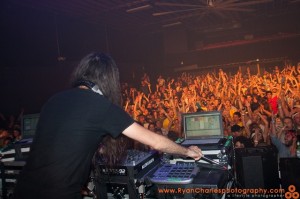 And in addition to keeping up with a tour blog as we wandered through some of the most internet inaccessible areas of the country, got a slew of video clips coming through the pipes…. some absolutely ragin crowd shots, a little bit of backstage nonsense, and the first batch of what we hope to be many Cozza Connection videos – which highlight some of the organizations that we are working with in D.C. an Detroit. (BIG UPS CauseCast.org & Ms Holland for CRUSHING IT)

We will be posting these over the next few days, so visit http://www.youtube.com/bassnectarlabs and subscribe to the video channel.

Next Up! Halloween weekend with a quick addition to the tour schedule….
FEAR & LOATHING IN ORANGE COUNTY!!!! HAHAHAAHA

Who’d a guessed it: Halos N’ Horns fest with Korn (when i was in High School we thought Korn was *so* weak, haha! Now i’m getting raised eyebrows cuz people think they’re so hardcore! How times change!) 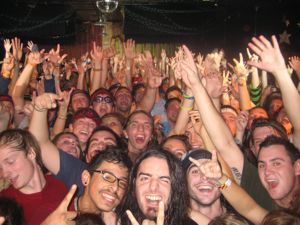 So it’s kind of a metalhead DJ’s ironic foray into ridiculum…a chance to right propper SWAT THA BAJEEEZUSS out of a sea of heavy metal freaks with all sorts of SMASHERS AND MASHERS!!! Custom cut this week: a whole new slew of insane remixes of Sepultura, Metallica, Pantera, Rage Against The Machine…even got som Jimi Hendrix acapellas and some sicko loops, and of course bigbang dubstep and drum&bass noiiiiiisezzzz. this will be COZZA HEADBANG, and it may never happen again. Click here to get tickets

And for Halloween night, we are off to Denver to slay a SOLD OUT Fillmore. BIG BEAR HUGS, SMOOCHES, HI-5s and TOTALLY BUGGED EYED GRATITUDE to all that grabbed tickets in advance and rammed this place out. If you weren’t able to get yours in time, no worries! We’ve added a second set to close out Halloween night at Casselman’s (remember its Daylight Savings!!). Fillmore show is THE FREAKER’S BALL MEGADOSE OF BIG BANGERS & ULTRAMAJICK. Afterparty music will be much more about just giving you a nice warm bass soup to swim in… Click here for the info.

After that… ramping up for the second leg of the tour with Nosaj Thing on board (LOVE TO DJ VADIM, HEAVYWEIGHT DUB CHAMPION & RJD2 for support as well!). Subscribe to the tour blog to keep up with the freakshow as we make our way through the Eastern, Midwest, and Northern US, as well as stops throughout those happy lands of the North, Oh Canada.

LASTLY, AND FROM THE HEART: Always remember that there are finite resources on this planet. If everything was divided up equally amongst humans, the world would look very different. Instead, 1% of humans in this country control 95% of the WEALTH of this country (That’s what happens when a Wolf In Sheep’s Clothing like Obama, or Our Congress, or of course Bu$h, allows a few wealthy bankers to steal 700 BILLION DOLLARS from US CITIZENS!)

That said, remember that it has ALWAYS BEEN LIKE THIS: The few rich cronies, cold hearted enough to propagate a multi-generational Control Mafia over the world’s resources (be they Kings, Emperors, Lords, Popes, or Bankers) stop at nothing to keep ALL the wealth in their few hands, while the majority of humans on earth live as some for of serf or slave or maybe a joker/jester/knight (Rove, Limbaugh, O’Reilly) or a favored baron (Rich, middleclass whitecollar conservatives)…but none the less, when something like THE INTERNET comes around that lets the serfs talk amongst themselves, and share TRUTH, not LIEs (like our corporately manufactured media) it presents a potential threat to the control of The Wealthy.

That is why Net Neutrality is so important. And that is why you have to be SOOOooooo careful with Republicans*. Because they pass an act like ‘CLEAR SKIES’ which was misleading, and was actually written to END the environmental protection program called “THE CLEAN AIR ACT”. So when John Fucking McCain recently announced that he wants to pass the “INTERNET FREEDOM” act, You Should Be Wary! The INTERNET FREEDOM act is misleading and dangerously deceptive, because it is actually designed to prevent “NET NEUTRALITY”…

As you should know, Net Neutrality is a GOOD THING. It is intended to protect equal access to the internet, and to prevent unfair corporate control of the internet. So THE INTERNET FREEDOM ACT IS BULLSHIT, because it is intended to GIVE FREEDOM TO VERIZON AND COMCAST and that’s about it.

it’s like making an act called “Happy Babies” that allows people to kill babies. It is literally that fuckin absurd.

*[EDITOR’s NOTE] Obviously Officials of both parties – Republicans & Democrats – are not to be trusted. Republicans just play the bad cop, so they are low-hanging fruit… just wanted to be clear, cuz The Democrats role as ‘Good Cop’ often lets them escape blame and they deserve a lot of it.