Blast Off: The TimeStretch EP 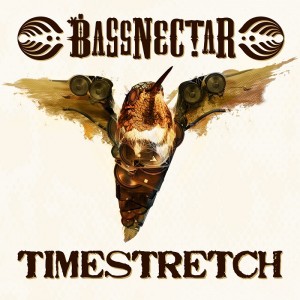 Spring is here, and as we set sail for 5 wild weeks of tour, Amorphous Music teeming with excitement to announce the official release of the new Bassnectar EP: “Timestretch” – AVAILABLE NOW at our little record shop. Each tune is only 99 cents, and there are cool bundles featuring new tricked-out merch, various musical formats (CD, vinyl, hi-fi) as well as bonus remixes and instrumental versions and loops.

Last January was supposed to be a vacation for me, but being the work-obsessed person that i am, i ended up working nonstop in the studio. And by February, i had created a lot of new material. Most of it was inspired by the hype of last year’s tour and is full of energy…perfect meltdown music for dancefloors. Plus the title track “Timestretch” came out so deep and beautiful to my ears, i decided ‘WHY NOT RELEASE THIS RIGHT AWAY!!!!’

Everyone thought i was crazy and delusional, cuz we were barely off the Cozza Frenzy whirlwind…hadn’t even finished the Northwest part of the tour, and i was supposed to be off in the Bahamas somewhere. Instead i was in a Bermuda Triangle (wake, work, sleep) and after putting the RUSH ON, i ended up with a STACK of new material… most of it is pretty pulverizing, in that i wasn’t trying to craft beautiful music, but was working with really fun jams of intense, freak-out bass music…tunes i can use on the Spring Tour and such.

I decided to call it Timestretch because it correlates with one of my favorite philosophies; How to slow down time and enjoy it on an ever-deepening level. With each day in my life that passes i develop an increasing gratitude for the blessings i have, and am constantly learning to see challenges as exciting possibilities for growth and healthy change.

So it was this kind of deep love for life that i genuinely wanted to pass on in the form of music. A small reminder to focus each day on what you have in your life that you are grateful for.

I remember in high school, my History teacher Mr. McCrystle was teaching about Current Events. He mentioned how frustrated he got when he heard people complaining that “The News” on TV or in the paper is always negative. ‘They are always bemoaning how awful it is, and how the front page is always full of horrible tragedies.’

But he pointed out that it’s a GOOD THING that The News is primarily bad, negative news. Because if tragedy was an everyday constant then it wouldn’t be news. If we read a headline like “Everyone Actually Did Not Get Killed Today!!!!” then it would be a sign that homicide was horrendously high. The fact that is STANDS OUT FROM THE NORM is a good sign.

Although i agreed with that lesson, i have taken the thought further; although it is good that headlines are so often tragic and horrible, it is still important to take a daily stock of what is positive…even if it *is* everyday normality.

The architecture of my hands, or the way my marvelous eyeballs coordinate with microscopic bits of electricity in my ‘brain’ to form thoughts and emotion, and translate information is SUCH A MIRACLE, yet 99% of the time i do not notice it.

This is what Timestretch is about….noticing all the little things and giving thanks for them. Not giving thanks to “god.” Just simply giving thanks. …allowing yourself to feel authentically grateful. That gratitude has, for me, created such an overwhelming abundance of inspiration, that i am excited to share it with you, and with anyone i can before i vanish.

My life is so wild and crazy, more than i ever dreamed. And every day i discover so many new options and angles and perspectives. I want to share that because i think it is empowering for humans to constantly be reminded of the blessings they take for granted. The passion that is created from this isn’t just about music. It’s not about specific songs, it’s about feelings, emotions, and how deep the rabbit hole goes.

And the hummingbird is an excellent mascot for this… because to our eyes it appears to dart around so quickly, and to it, i assume we appear to fumble around in slow motion like big, wierd giants.

I wish i could make my mind move faster, so that my surroundings appeared to move slower…thus allowing me to interact deeper and more thoroughly.

Like in the movie The Matrix, Neo accelerates his consciousness so intensely that bullets appear to move in slow motion. He eventually thinks/moves so fast that the bullets stop altogether.

On a much more realistic level, i think it is possible for humans to develop our rate of perception past the normal rate, and in doing so, stretch out time.

Maybe not. But it’s definitely something i think about.

So anyhow, i am quite sure you have stopped reading by now, but i will continue with my long-winded story.

We got the release mastered by Bil Bless (YOU ARE THE MASTER!!!) and we got the artwork squared away (THANKS JONATHAN @ CHILD’s PLAY and of course PETER CLARK, the young artist who created our crazy Hummingbird) and the Amorphous Music team began planning how to huck this release as high into the sky as possible.

We wanted a big explosive release at the end of March, but decided to pick a small DJ-outlet to do a pre-release. I thought it would be cool to give them some bizness as the industry is such shambles lately, and i knew the BASS HEADS were going to support this release (THANK YOU!!! AS ALWAYS!)

So we gave it to beatport to do an earlybird release, and within a few hours it has SMASHED through the charts, snagging a Royal Flush in the Dubstep Charts: Number 1 through Number 7 were all tunes off the EP! (AGAIN! THANK YOU THANK YOU THANK YOU!). 2 days later, the song ‘Bass Head’ was number 8 on the overall Top 10 Charts.

But the people at Beatport, instead of being enthralled that they had so many new customers sign up, oddly did what nobody ever expected – and what nobody can since explain: They wigged out, assuming (without contacting us, and with no proof) that we had to have somehow hacked their system to have a bass track make it to the charts so fast, especially with all the new user registrations.

Without any warning, they yanked the release from their store (one of the stupidest most ridiculous things they could have done, but that’s them.) We tried to tell them that our fan base is INSANELY enthusiastic and as supportive as it is voracious (dozens of them have tattooed the Bassnectar logo on their bodies, so buying our release was pretty automatic as far as their support goes). The huge influx of new customers was because we had given Beatport the release early and sent our fanbase directly to them, but all we got in response were voicemails, and lame email responses. Then hours later they figured it out, but it had already been removed from their system, the chart-status lost, and …it was just DUMB TIMES. …took them 36 hours to add it back up. Really whack service.

I hear they have done this to a lot of artists when they do self-releases, and i think it is horrible. But that’s one of the many random aspects of the music industry. For myself, it doesn’t matter, as i have this killer website, so many good folk helping me out, and a great team around me. But it pissed me off to think about them doing this to someone else, maybe on a younger artist’s first release, someone who it’s easy to take advantage of …it was just SUCH a dick move! (end rrrrant).

Although initially quite upset, i quickly realized that their business is actually minuscule compared to all the humans out there who are tuned into Bassnectar, so instead of giving their ungrateful arses any more love, we shifted into OVERDRIVE (thank you Daysha!!!!!!!) and over the weekend created the release page for the full Timestretch EP.

Check it out!!!! You can get the songs DIRT CHEAP as singles in a variety of digital formats, plus there is CD, vinyl, new merch, and a DJ Pack with instrumentals, samples and loops.

Because of the fiasco, we had to rush everything, so a lot of the physical merch won’t ship for a few days, but its all limited numbers, so if you are interested, you should jump on it.

I cannot waiiiiit to drop ‘Here we go’ at every freakin show for the rest of my life…can’t wait to feel ‘Bass Head’ drop of 15,000 heads at Coachella, to watch the crowd pop at All Good during the ‘Blast Off’ and can’t wait to feel these songs mutate across crowds (from big fests to small towns: we are coming atchaaa) as we make our way across the country this spring. The tour schedule is loaded, there are a grip of dope summer festivals, and we leave in two days!!!! WOOOOOOOOO HOOOOO!!!!

Make sure to hit the request line if there are specific songs you wanna hear at any shows coming up (no promises, but i’m very curious what you want) and also if you have any dope remix ideas or projects, i’m ALL EARS!

Check it out and we will see you soon
🙂