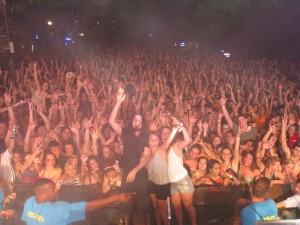 Welcome to Bassnectar’s Guide To Summer Frenzy.
After a raging Timestretch spring tour we have officiaaaally kicked off summer festival season. Last weekend’s over-slammed set closing out our stage at Summer Camp was bonkers, bursting at the seams, and an amazing sight (thanks to the extra bright and glowing crowd). Afterwards our crew made a mad dash for Austin, TX to a sold-out show at the legendary outdoor venue Stubb’s. Hotter than hell, and oversold, the show was the heaviest yet for us in Texas, and now it’s onward to a season of bass and heat.

I wanted to flash-release a little summer time jam, and decided on a brand new loopy remix i did of an awesome band called “Sleigh Bells” …it isn’t meant to be a banger or anything more than a nice, thick slice of dreamy sunshine (and bass). Enjoy!

And randomly, here is the latest tourcam, with footage from our shows in Santa Cruz, Lake Tahoe and San Francisco, for those of ye that like to collect these little montages.

So here is a little run down of the action over the next few months:

This Friday, June 4, we return to the Wakarusa Music Festival. The first time i played this was back when it used to happen outside of Lawrence, KS. I was in a small, over-stuffed DJ tent, my tiny ‘stage’ was over-run with a mob of writhing kids who wanted to daaaaaance, and it was a blowout. I returned the next year to play inside of a huge tent, during the mayhem of a thunderstorm. One small problem: the tent was not waterproofed. Add to that, we had nearly 300 freaks up on the stage, and i was litterally holding a CDJ in one hand like a guitar while my buddies John and Jesse and friends literally held up the collapsed table with the soaking mixer on it while we played overtime. Totally bananas. This year, we are thrilled to have a midnight slot in the ‘Revival Tent’!

Then Saturday we are off to San Diego, for the Reset Festival. Months ago we were asked for a wish list of a few musical recommendations, and they went with three of our favorite abstract electronic music artists today: Flying Lotus, Eliot Lipp, and Alex B. Many others are on the eclectic high power lineup including 12th Planet, A-Track, Le Castle Vania and more….SO CAL READY TO RAGE!!!

June 11th, is my first time at Bonnaroo, and we are lucky enough to have a prime-time Friday Late Night slot. Like Coachella, the festival production is TOP NOTCH, the sound will be utterly immersive, and we have loads of musical bombs to bless your tender ear drums with. i’ve heard rumors of some crazy glow-stick war, and all i gotta say is i LOVE enthusiasm, i LOVE a frenzy, i LOVE melting down with people and i even LOVE seeing showers of light in the sky, but LORD HELP ME I HATE GLOWSTICKS when they are thrown at the stage. We are actively enlisting members of the “Save Bassnectar’s Eyeballs” Foundation. Please join this non profit group and do your part to keep hard plastic rockets from being thrown at the stage. We have tear gas and a high-velocity fire hose in case shit gets out of hand, but i’d rather it not come to that, so go BONKERS like i know you will, but for the love of christ and anything else you deem holy, PLEASE keep dem glostix AWAY from the fucking stage. I will reward you with sounds like you have never imagined
🙂

Then there is a nice 3 week break where i will pretend i am going to actually have a vacation, and instead end up surrounded by robots and laptops cranking out music and master plans.

Then it’s round three for us at the All Good Festival. Judging by the lineup you would think this is just some hippies with banjos drinkin moonshine out in them thar hills, but lemme tell you: the last two years the crowd has been among *THE MOST INTENSE* of the year, both years. Imagine a massive pit of 10,000+ people, surrounded along the back by a large hillside, covered in an avalanche of freaks. This freakbowl goes well over 15,000 people deep, and one of the best features of the event: they alternate stages. So when its on, it’s FULLY ON, as in the only thing on, and we get to blast the fuuuuuuuuuuuck outa them thar hills. Amazing energy, amazing electricity, All Good is Blast Off time.

Then we do the Saturday Sprint from West Virginia to Kentucky. Kentucky is one of the few states i have never played in before so we are gonna break that fast at the Forecastle Festival in Louisville. The line up is mega dope, and methinks it will be a great combo of old and new ears, thus giving me a chance to explore new versions of classic content…i always love that.

The next weekend is a Triple-Whammy, kicking off with our third Camp Bisco appearance. Another festival that alternates stages, we get to smash the bajeeeziss out of that place during DB’s set break on friday night. The lineup here is rock-solid, featuring Rusko, Theivery, Diplo, Dieselboy, Sub Swara, Welder, Beats Antique, Gift of Gab and many other crazy artists. The last time i played setbreak was smack dab in the middle of a full moon rainstorm, and it was TOTALLY off every single possible hook. Mega hyped for another round here!!!

Saturday i zip off to Toronto to lay loving waste to the Opera House. Mid Summer Toronto is hot as hell, as was the way-oversold Wrong Bar last time we were there. This time we have a bigger venue, bigger system, and a full stack of new tracks and tricks… Hopefully we will survive the heat. Sunday is Montreal at the infamous “Piknic Electronik Festival”…an outdoors all-day music fest, and we have the honor of closing out the stage. My second time playing in Montreal and guaranteed to be a total freakshow.

I’ll save the second half of summer for another update, but it includes Audiotistic Festival, Wanderlust, Shambhala, Outside Lands, Mile High, Chicago House of Blues, and Electric Zoo. Some links and preliminary details are below, can’t wait to see you all out there in the wide & wild world!!!!