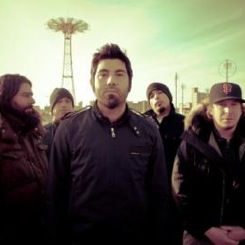 This song has been in the works all summer and is a mad mix of deep, heavy, grinding guitars with glistening dubstep beats and the amazing vocals of Chino Moreno, lead vocalist of The Deftones. I wanted to make 2 different remixes for this song, one that simply reinforced the heaviness of the rock/metal sound and gave it even more sub bass & thickness than it had before.

But then this whole freakish dubstep part came about, and instead of making 2 separate voyages, I just kind of mashed them together. It was going to be on the Wildstyle EP but since it has such a different sound from all the other songs, we decided to just give it away into the universe and let it richochet off whatever it collides with. This is a tune for the headbangers out there!!!

When I remix music, I usually remix the vocals, either literally moving the words around, or even just figuratively taking the song and deriving whatever meaning I feel it speaks to me. In addition to playing PLENTY of air guitar while i worked on this, I sang the lyrics over and over to myself, even tweaking them to change and mean new things. I began repeating “A CURE IN YOUR MIND” repeatedly and soon we decided to move forward officially and donate a dollar per ticket for as long as Bassnectar is in existence, from any Bassnectar event to a series of charities… This song was part of the inspiration for that, even if it all happend from ironic mutation and remixing….

The next bootleg we are releasing is way softer, more of a beautiful journey, so this one is here to slay. Please enjoy and pass on to your friends, neighbors, enemies, teachers, pets, animal, vegetable, mineral, imaginary friends, sock puppets or whatever, and get your dose of mutant metal mashup before the onslaught of Wildstyle hits you with the wobbles and the womps!