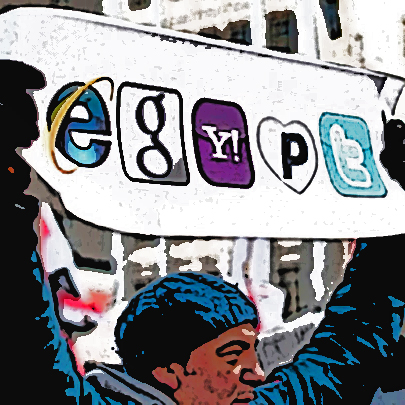 I cannot pretend that I understand the intricacies of Egypt’s current political situation (neither the history of it, nor the most recent developments: the people’s uprising, the overthrow of a dictator, etc.) but I do know it is amazing to witness humans coming together to organize and rise up against injustice. As with Obama, whom I always took with a grain of salt (knowing he has tendencies to be inept at best and corrupt at worst) I was happy merely with the SYMBOLISM of his presidential victory. Because for a country that is shamefully built on slavery, with a pathetic legacy of racism and prejudice, this was a symbolic achievement: a majority of US citizens had looked past racism in a way that would have been impossible 50 years prior. That was a big deal.

So it is a big deal also that the Egyptian people, under strict rule of an unjust dictator, found courage and conviction to unite together and stand up to an aggressor, against all odds. Additionally it is extra special that this uprising was fueled by internet organizing and social networking (yet another example of why it is SO important to fight government & corporate control of the internet, on any level. Net neutrality should be defended as a direct lesson from the victory in Egypt).

What happens next is of course uncertain, but I am an optimist. In this case, my optimism is fueled by the inspiring courage and success of the underdog.

And so with a bit of playfulness, I give you this:

This was a song I loved as a child, and something I started working on back in 2002. I called it the 2003 remix because I think that is when I actually finished it, but of course I never released it; just kept it as a secret weapon and bootleg. (I love the whistling part in the middle.)
The beat is a bit of an older style… 103 bpm hip hop beats with fuzzy bass and a playful attitude. Newer/younger fans who separate music into 1 of 2 categories (“filthy” or “Not filthy enough”) will undoubtedly have no interest in this song, as it is basically a b-side remix that has been locked away in my vaults for many moons. But the old school heads may enjoy it and, regardless, I love it.
A few hours after hearing the news that Egypt was becoming a democracy I was sitting on a plane next to my buddy Tamer, who is Egyptian, and the joy in his face was electrifying. He was beaming, and I thought maybe it would be fun to dust off this old tune and huck it out into vapor space, here you go:

THE BANGLES: Walk Like An Egyptian (Bassnectar’s 2003 Remix)
(Click to download)
(Link has now expired – head to our Free Music page for this and other downloads.)

3. GHOST IN THE MACHINE

As many of you know, I care a *LOT* about the quality of experience at a Bassnectar show. What many of you probably do not know is the extent to which myself and my team go behind the scenes to battle the forces of evil on a regular basis. This weekend in Tahoe was no exception. Coming off of a gorgeous Santa Cruz show, and cruising into the magnificent Lake Tahoe area to knock out 2 back to back sold out shows sounded like a day dream. And quite frankly it was: beautiful crowds each night, and wonderful experiences had by many, many people. But there were a ton of headaches to be had with over-zealous hyper-conservative officials of the area, and capped off by a SUPER frustrating collapse of the sound system, 20 minutes before i was supposed to end my second set. I am not used to such jarring endings without proper closure, so I was definitely disturbed by such an alien phenomenon meddling with my music.
It turns out that the sound system, which was installed *DECADES AGO* in that room, ran through an old sound processor, which against all odds, decided to explode *RIGHT* in the middle of my set. It didn’t explode during my 2+ hour set the night before, or my 2.5 hour set a year ago, but Saturday Night, it gave one last, dreadful goodbye to the world and jumped off its own little bridge into the Netherworld.
A moment of silence please, for the trusty processor at Mont Bleu. RIP 2011.
That said, looks like we will be traveling with our own sound system this Fall, full rig with backups, so as to avoid any similar cartoons in the future.

4. AND AS FOR YOUR QUESTIONS

Gadzooks! Over 300 amazing questions in 1 week. Nearly every single one worthy of a detailed answer… My mind is reeling at the thought of how much time this will take, but I am inspired, and looking forward to digging in. Our goal right now is to address one a week, and see how it goes, so check back in at this blog on Thursday, and we will kick it offfff.

Bass Center 2, a bunch of sold-out shows in the South, then Kansas City, a stop-off @ Snowball, and then Australia, followed by the April Tour. KABAAAAANG!!!