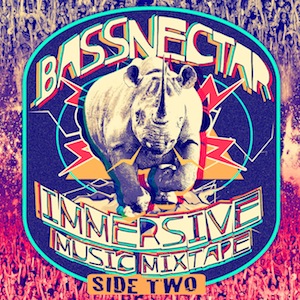 The Immersive Music Mixtape is designed as a two part journey through the broad spectrum of my love for music.

While it isn’t all encompassing, it’s definitely reflective of both the wild side, and the deeper, more melodic side. I wanted to explore unique ideas or leftfield directions while still bringing the heaviest sound possible, and part of that involves reaching back into the old throwbacks & classics, sampling their magic, and reinventing them with new energy. Twisting it all up into an extended ride through my imagination…

Some of this is mixed like a peak-time set with all levels set to 11, while a lot of it goes deeper than usual; more ethereal, more surreal, more experimental.

Kind of like a sunrise set, in some strange Other World where the sunlight melts your mind. 🙂

On this brand new Side Two excursion, take a trip through my sonic kaleidoscope and hear brand new music as well as some vintage selections and re-creations, with exclusives including remixes of Grimes, The Deftones, Lux and Telefon Tel Aviv.