WHERE IS MY MIND?

In the last 5 months I’ve worked with over 50 different humans, in 10 different studios, in 6 different cities, and now I’m sitting here looking at 26 new songs, of all different styles and genres and attitudes, and I’m starting to think I may be a workaholic… 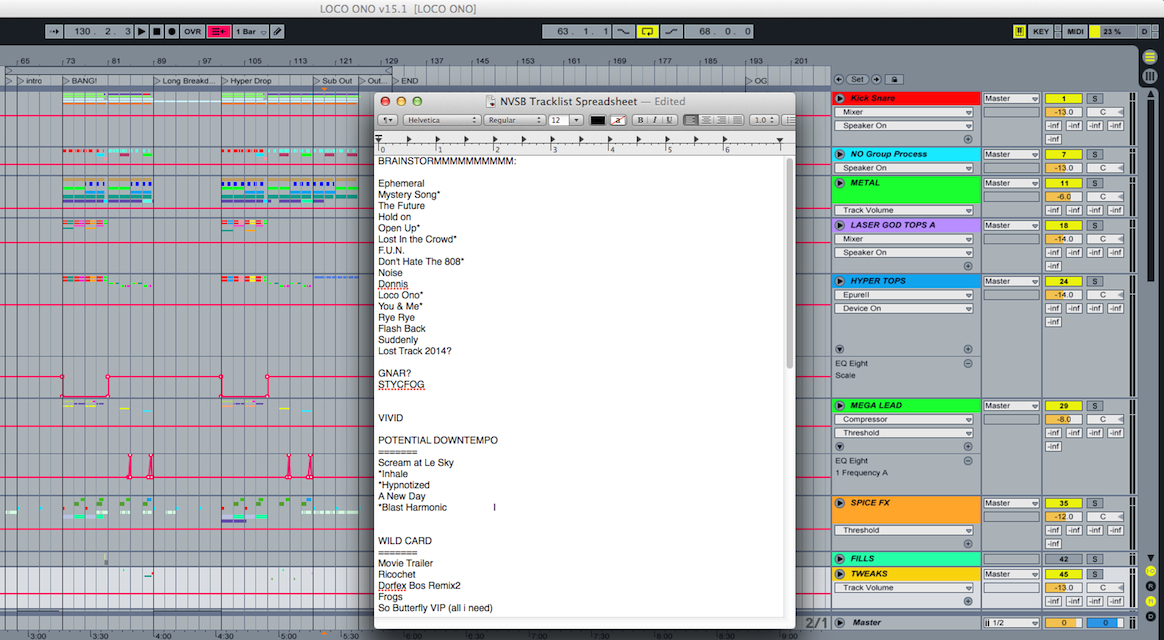 Last fall, while zooming around on tour, I set out to write an album which would really represent my diverse tastes in music. I approached it with a specific and dynamic palette of influences, ideas, preferences, and styles. Sometimes when I hear requests for my “older material” (from someone who only discovered my music relatively recently) or when I hear a comment about a song being “too trap” (as if 808 drums are no longer allowed in music! …when 808 beats have been a part of my production since…1996? 1997?), I think about how far back my musical influences stretch… how multidimensional they are.

I wanted to reach back into all the various corners of those influences (death metal & grindcore… gangster rap… classical… psychedelic rock… techno/ambient… IDM/glitch… downtempo… trip-hop… breakbeat… trance… every vein of electronic music… folk music… big band… jazz…. acid jazz… mushroom jazz… etc etc etc) and I wanted to play the field, like a human pinball bouncing off all the extreme ends and complicated dimensions of my own musical tastes. I wanted to create an album full of music I love. I wanted to have fun, play games, tell jokes. I wanted to make insane bangers, and also to explore deep sonic journeys… and everything in between.

By the end of Summer 2013 I had more than enough music to complete an album, but the songs weren’t really finished. Some of them were crude ideas, and a one in particular was a little track I began in 2002 and never got around to finishing. I decided I wanted to reach out to collaborators (not just other producers, but singer-songwriters, guitarists, pianists, composers, vocalists of all sorts, even entire live bands) and get interactive. By October I had rewritten many songs into a unique format: no drums. no bass. I reduced all the wobbles and lasers and synths and sound FX into basic chords: piano, guitar… maybe some simple background accompaniment. I sent them out to all kinds of people, mostly vocalists or composers, and asked them to write to it, riff over it, mash it up… see what came back. By the end of Fall Tour, I had almost enough music for an entire album that sounded like some weird indie rock band… still no beats, and no bass. I spent the rest of the year recording new ideas, sitting with vocalists and writing lyrics… playing guitar and piano and constantly remixing and transforming the ideas… just trying to see what would come up.

In January I started taking these songs and “remixing” them, as if they were songs by some other band, and I was hired to do a remix. I treated them like an Ellie Goulding song, or a Deftones song… I ripped them apart, cut them up beyond recognition, and added tons of weight, heaviness, filth, noise, beats, basslines, sound effects etc, often winding up with multiple versions of each song. On almost every individual song, I would act like some manic Goldilocks character – alternating back and forth between the extremes “this song is too hot, this song is too cold” trying to get everything “just right”.

Being off the road is weird. I’ve never had a 6 month break before… not since I was in college and throwing nonstop full moon parties and renegade warehouse raves, and trying to save the world 😉

I’ve spent a lot of time hiking and enjoying nature, reconnecting with my friends, being invisible and relaxed… but most of my time has been spent working obsessively. I’ve worked a 13+ hour shift, 7 days a week, almost every single day this year. And I’ve collaborated with so many people that many days are spent with 5 computers in front of me, on the phone with New York, with Atlanta, with Chicago, with Denver, with Los Angeles ….losing my mind and losing myself in music.

I’m sure I will get a single or two out soon, ideally before the summer… but it’s hard to release one slice of the cake when each slice is so different and unique…

Oddly, as much as I look forward to delighting you with this, I don’t care if you don’t like it. Or if you wish it was more like this, or less like that, or not enough this, or too much that. I don’t care! 🙂

I’m making what I love, and I feel so grateful when I look ahead at all the amazing opportunities I will get this year to play these songs – and remix them and reinvent them – at live shows…

One of the best parts about this time off the road is being disconnected from the internet… not checking Twitter or Facebook. I kept feeling the reflex to check in, say hi, etc… but it’s just simply too deliciously fucking wonderful to not be plugged in. I have a personal goal of spending as little time as possible online this year…. ha, we will see how it goes (wish me luck).

But I’ll be seeing you all soon out on the road, just wanted to give you a little update on where my mind is, and what I’ve been up to.

Hope you are healthy and happy,