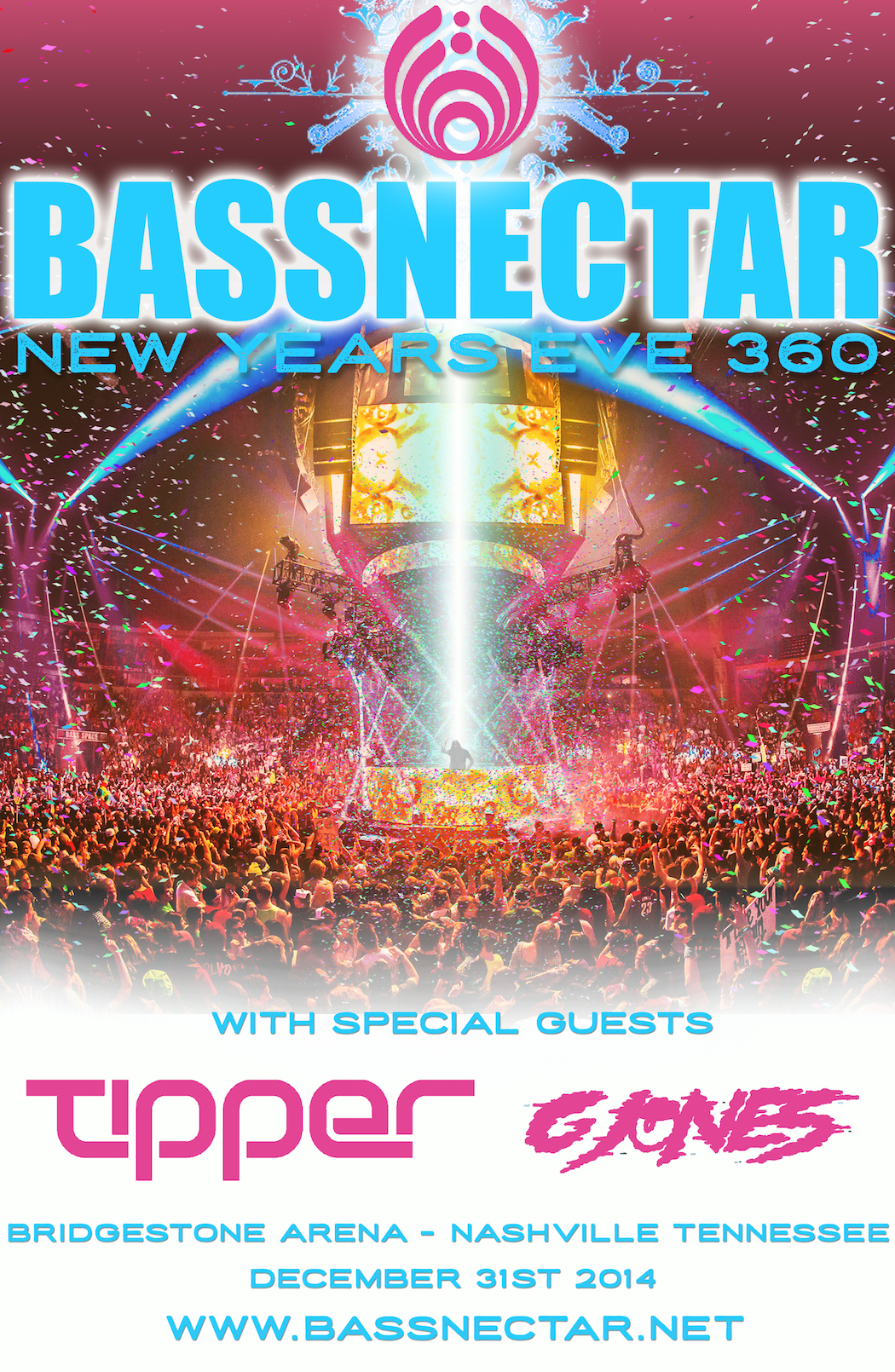 Yes, we’re bringing Bassnectar 360° back to Nashville for New Year’s Eve – how could we not!?? With last year’s event selling out once again, we are zooming back for our 4th annual: December 31st, 2014!

#NYE360 vets will know what to expect – noise, beauty and a close encounter of the thirty third kind, in 360 degree smash-o-vision, this time with support from legendary bass music pioneer Tipper and West Coast up-and-comer G Jones!!!

Tickets, Travel Packages and VIP tickets are now sold out!

VIP Upgrades are now sold out!

Bassnectar presale tickets that were purchased through Frontgate tickets – not via promoter presale – come with floor wristbands.

This is an 18+ event and ID is required at entry. The following are the allowed forms of identification for the event as per the facility:

Rules for wristband distribution:
> Lines may not form prior to 11:00PM on December 30, 2014.
> The queue line for wristband exchange will form on 5th Ave. South — guests standing in the queue are required to stand within the designated queueing area.
> Guests may not hold space in line for other guests — security personnel will be instructed to send any guests holding spaces in the line to the end of the line, regardless of their original position in the queue.
> Wristband distribution is planned to begin at 11:59PM on December 30, 2014, however, the facility reserves the right to begin wristband distribution at any time following 11:00PM on December 30, 2014.
> Each guest must hold their own ticket to receive a wristband — guests may not exchange tickets for wristbands on behalf of other guests that are not present in the wristband line.
> This is an 18 and over show and all guests exchanging wristbands must show identification (please see the Accepted and Unacceptable identification lists on the Bassnectar.net page).
> Wristbands will be applied directly to the wrist of each guest exchanging a ticket for a wristband by facility personnel.
> Once all wristbands have been distributed, security personnel will make announcements and the line will be shut-down — no further wristbands will be distributed

If any of the following items are not present, the facility reserves the right to deny entry to the facility or the GA floor:
> Valid ticket with barcode.
> Valid identification to verify 18+ (even though this was verified during distribution, it will be verified again during facility entry).
> Valid GA floor wristband on the wrist it was applied to by facility personnel — wristbands with visible tampering will be removed by security personnel.

Allowed items:
> Earplugs
> Non-professional digital and film cameras
> Small bags and drawstring-style backpacks
> One factory-sealed plastic bottle of water 20oz or less (caps to be removed by security at the entrance)
> Items such as tampons, chapstick, gum, and cigarettes must be factory-sealed
> Empty Camelbaks (the carrier may have no more than 2 main compartments and 1 small compartment)
> One (1) empty water bottle (20 oz or less)
> Totems of reasonable size and constructed in a way to not interfere or affect public safety
> Reusable light-up toys & LED Gloves
> 1 inflatable toy (deflated upon entry)
> Hula Hoops
> Costumes
> Masks (may not fully cover the head)
> Face paint (already applied prior to entry)