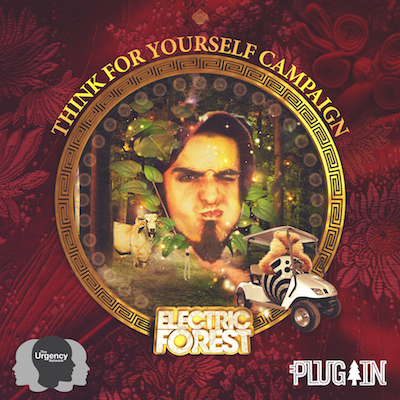 Announcing our “Think For Yourself” Campaign – with prizes from Electric Forest!

I often get upset when I hear about terrible things happening in the world. For some reason my instinct is to defend the underdog: if something is unjust, I have a reflex to stand up against it. My reflex to get upset isn’t really a negative feeling though. It’s actually more like inspired to solve a problem. However, issues and problems are seldom black & white: things are often not as simple or clear as they appear to be. Often times my initial understanding of an issue is over-simplified, and in some cases after thinking critically about something, I literally change my mind drastically – switching sides against the point I previously believed and siding with the new information which makes the most sense. And I love when this happens! In the pursuit of truth, I would rather follow what makes the most sense, versus what I’m told to believe, or even what I used to believe in the past.

Usually, before I express myself about a divisive issue I try and learn as much as I can, and explore the issue from different view points so I can look at it from all sides. Once this happens expression becomes automatic (I can’t help but be direct) – so for this creative campaign with Electric Forest, Fight for The Future, and The Urgency Network I’m challenging you as festival goers, music fanatics, and people who enjoy extensive freedoms and liberty (in comparison to many many places in this world) to take a critical look at some current issues of our day, and to form our own opinions: to “THINK FOR YOURSELF”. That doesn’t mean to just speak loud and proud about what you believe in! It means to actually think critically about what you believe in (to literally wonder “am i right or wrong? and how so?”) – you may find as you explore the various sides of an issue that you have a lot to learn. I know I do! And as nerdy as it may sound: learning is one of my favorite things in the world.

The following information is philosophical rather than political. In fact, I think that at their core these topics can relate to you as a person, to your family, to your friends, and to your understanding of the meaning of life. My hope is that you will read the following and participate in this project over the next few weeks to spend some time thinking about your assumptions, and how you want our future to unfold. You can discuss it with your friends, or read dissenting viewpoints. If you instantly agree with what you read, maybe try researching some counter-points. If you instantly disagree with what you read, maybe argue with yourself for a little while, and see what happens.

Benjamin Franklin said that “Those who would give up Freedom, to purchase a little temporary Safety, deserve neither Freedom nor Safety.” This implies both an active sense of thankfulness for our daily rights and freedoms (so easy to take for granted) and also a reminder that these rights are invaluable: they were given to us by countless humans who fought and died so that we could enjoy more freedom in our lives. But beyond that, it implies that you only deserve freedom if you are willing to fight for it. If you don’t value it and give it up easily in exchange for safety, then in the end you truly don’t deserve it.

So when something traumatic happens (like the attacks of 9-11, or ISIS beheadings, or really anything which feels frightening or threatening) it’s easier to prioritize safety over freedom. For example in the aftermath of 9-11, a wave of fear spread over North America. We quickly gave up rights to freedom, privacy, and liberty in exchange for safety. By increasing the powers of Homeland Security with laws like The Patriot Act (funny how they name laws after something nobody wants to argue with, when really this is one of the least Patriotic Acts I can think of), we were decreasing our freedom; handing over our powers to secretive government agencies who have little transparency or accountability. (They can see you but you can’t see them. They hold power over you, but you don’t really hold power over them because they’re invisible.) It’s kind of like martial law during a riot: if your home is being ransacked and looted, and your family is being beaten in the streets by an angry mob, you may welcome the National Guard to protect your home or your family. But once you have armed guards in your house, you aren’t as free as before the rioting started. Obviously that’s a pretty extreme example, so how about something more close to home?

Music Festivals. We all enjoy music, being together with our friends underneath an open sky, and soaking up all the magic which comes from these experiences. But a lot of people don’t understand festivals or why they’re important, and when that knowledge isn’t shared it leads to Fear, and those who are afraid are eager to give up their Freedom for Security, which sadly usually means the people in power taking more Control. Your freedom to attend festivals can be quickly taken away (this really happened – I’VE WRITTEN MORE ABOUT THE RAVE ACT HERE). Being able to speak loudly and gracefully through free and open communications is the key to a strong and supported festival culture.

The Internet. It’s so pervasive that it almost feels unnatural to talk about it like “a thing”. Many of us experience life-on-the-Internet more than life-off-the-internet. And our dependance on it is steadily growing. Yet multi-billion dollar corporations (who are now protected with laws giving them human rights: this is real, CLICK HERE TO READ MORE) are consistently finding ways to sneakily pass legislation (this has happened repeatedly over the past few years) which grants them power over the internet: which web sites get fast service and which websites get blocked or slowed down, which users get fast service, even which links you can see, or what comes up in your searches.

Privacy. This word has become loaded, and often implies you have something to hide. But don’t believe the hype. Every human deserves private space and sanctuary to share the thoughts and information they want, and to keep other thoughts and information to themselves. Nobody deserves to spy on you. No government agency deserves to snoop on your phone calls or email (even if they make you think they are only spying on you for your own good – “To fight Terrorism”. And even if you don’t care about this kind of stuff, should you choose to take a naked picture of yourself, that should be your own private property, not something the government can see or distribute. Over the past decade it has become normal to broadcast nearly everything we think and do online: and we assume there is no danger in doing this. Not only does our appreciation of privacy erode slowly over time, but once it’s gone it may not be possible to get it back.

Over the next four weeks The Urgency Network will be sharing information and ideas about our freedom of expression online, and why it’s important. Engage with an open mind, and to draw your own conclusions on what you think the internet should become.

Tune in, sign up, spread the word – every time you get involved you’ll be entered to win a trip to Electric Forest, including a spot onstage for the Electric Forest Family Photo, and a Golf Cart adventure with me, zig zagging you wildly around backstage and talking more about life philosophy! 😉

CLICK HERE TO ENTER THE “THINK FOR YOURSELF” CONTEST

And here’s some more info and links I put together about these issues.