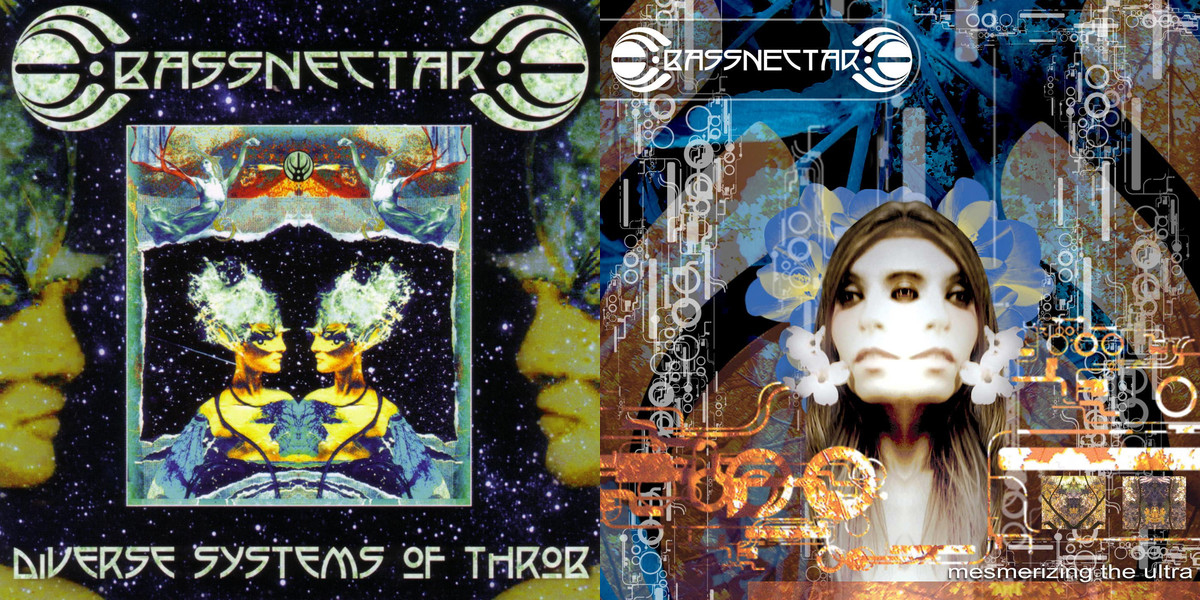 About 15 years ago, at the turn of the millennium, I began working on some music which felt both futuristic and innovative, as well as deeply rooted in sounds I had heard in my favorite songs from artists all over the world. It was a heartfelt art project, all for fun, all about the love. I had been studying electronic music at school for 5 years or so, and DJing mostly at underground raves, free full-moon gatherings, and festivals like Burning Man, Shambhala, etc. The word “Bassnectar” was the name I chose for my “band” …it was (and is) my art project. It was not (and is not) the name of a human. It’s the moniker I chose to name the music and art I was creating.

As songs and ideas began to develop, and my informal DJ mixes (mixtapes) grew exponentially more customized, I started realizing I was actually writing albums, not mixes. There was no record label who understood the ‘genres’ I was making (perhaps because I named the genre “omni-tempo maximalism” which meant basically “I can do anything I want, and there are no musical rules”) and no touring infrastructure for DJs in North America at the time, and quite frankly no actual “fanbase” – basically just a growing scene of friends and family, comprised of freaks and artists and collaborative minds who gravitated toward a sound that didn’t really have a home or a face…

The first actual collection of music which I felt was “an album” was ‘Motions Of Mutation’ [2001] …and it was basically a super-deluxe mixtape of remixes & bootlegs, mashups & collaborations, and a few original tracks (many of which were just complex, seething sonic collages of found material with added beats & FX). I worked with my friend Volo (who helped me design the first bassnectar.net website in 1998, and sat patiently with me as I/we obsessed over all the artwork and cover art) to design the cover art of Motions of Mutation: that visual process mirrored my sonic process, as I was taking/sampling images of other collages from my friends (in most cases Darrah Danielle foundfables.com) and then editing and remixing them digitally and layering the F*CK out of everything. I pressed up 1,000 CDs, posted the MP3s for free on my website, and gave everything away. This continued for a while, and soon I had another new album.

I called this ‘Diverse Systems of Throb’ …it was over 15 tracks of all styles, speeds, genres, and attitudes, and was woven together with vocal samples from innovative thinkers and activists like Noam Chomsky, Mumia Abu Jamal, Fred Hampton Sr, Michael Rupert, and even included a recorded radio broadcast of Laura Flanders (working assets radio) and cuts of spoken word I got from friends like Andres Octavio and Scott Smith. Again, I had no label to release it, so I just did it myself. And my ‘career’ as a touring musician and obsessive music producer was suddenly squeezed as I began an additional full-time career as struggling independent record label. I would ride my bike around the playa at Burning Man with a basket full of the CDs and either give them away or leave them in pretty places with notes for whoever would find them. I tried to sell them, but it was more important to me that the music was heard so if someone couldn’t afford it I would rather they have it. I could not find any press to cover it or help me promote it, minus a few brave underground sources… I think this was before Myspace existed… this was a lot of email lists and hand-to-hand musical combat 🙂

As all this was happening, the alternative scenes of the West Coast underground were expanding, in large part thanks to Burning Man and Shambhala, as well as the remnants of the rave scene, the constant and nonstop work of all the free-party families like Moontribe, 13 Moontribe, Spaceship Gaia, and countless others. This was not the over-commercialized “EDM scene” you see today. This was not the mass-marketed ‘mainstream pop’ where DJs are glamorized glory stars. Instead there were legions of committed, hardworking humans and artists and social rejects whose art form was “The Scene” – it wasn’t an industry, it existed both as art, and also as a political celebration of rejecting the norm and going outside the bounds of conventional concerts and American pastimes. It was DIY, punk-rock, and beautiful.

The DJs were usually just as involved in throwing the events, scouting the locations, working the door, helping park cars, pass out fliers. Nobody got paid. Nobody was charged anything. And while that isn’t very sustainable, and while there were many downsides and caveats, the music was a reflection of this time: pure and authentic, unpopular and raw. I made this music because I was in love with it… so in love with I could cry, and so in awe of it I had no choice but to sit in the studio for months on end letting it flow in and out of me. I felt like a slave to it, and simultaneously a master of it.

Ironically, I still have the exact same relationship to music now as then, I just had to add on more and more full-time jobs to keep up with everything… eventually I was working 90 hours a week, and playing over 200 shows a year, and felt like I was moving at the speed of light. And everything I was making/remixing/composing/recording/producing back then felt like writing in my journal. (Making music today feels identical to making it back then, even if it sounds different to someone else. It’s just a natural creation and an honest reflection, and even if it’s for sale on iTunes now, its still a gift from my heart.)

As ‘Diverse Systems of Throb’ (DSOT) was throbbing away I was gushing ideas regularly, and soon had a second album, called ‘Mesmerizing The Ultra’ (MTU). I had been heavily influenced by the trip hop and acid jazz artists of the 90s and all the ambient/chill room music which was so prevalent then. Additionally, the balance between ‘feminine’ and ‘masculine’ was of extreme importance… songs which could go from pulverizing to enchanting, or which could swing between energetic extremes. To me, the album is a journey where each song’s personality works off the previous song, and sets up the next one. Including input and collaboration from so many like STS9, HDC & KRS One, Michael Kang, Sayr, FreQ Nasty, Sunru, Buckethead, and a zillion other friends & musicians… this album was a family affair, and a reflection of a sound & movement which was both sacred to us, yet off-radar to the masses. It was very heartfelt and very special (and still is, to me).

Due to some frustrating record label setbacks, both albums were not available for a long time – and when it was available, it was confined to low resolution versions. I was busy then, hard at work making new music, and zooming around the world nonstop, and when life gets that hectic there is kind of no looking back: and even now i feel I still have 8 zillion ideas which are begging to be set free and fly. So unless you really knew where to look, both DSOT & MTU kind of faded to the periphery.

In 2014, I realized it was the 10-year anniversary of DSOT, and then in 2015 the 10-year anniversary of MTU… I decided instead of going through a bunch of hoops and hurdles, I would just like to give this music away, post it up wherever it goes, and let it be shared with whomever wants to hear it. It’s an amalgamation of MANY people’s thoughts & ideas. It’s a reflection of MANY artists and styles and sounds and entire scenes from the past which came and went off the radar, in the shadow of the mainstream, in the underground, before many of today’s DJs were out of Jr High ; )

This music isn’t something I want to make a big deal of and claim ownership of, at least not in this raw form… I just want to let it exist, and if you enjoy it then maybe it will influence you somehow. Maybe it will become some small part of your own reflections and what you choose to give back to the world around you.

Thanks for tuning in, end ramble…